Phil Waters of Pride of Cleveland Scooters was kind enough to share his notes from the Motorcycle Dealer Expo in Indianapolis, from a scooter-dealer’s perspective. They’re presented here in their entirety, unedited for sake of expediency. Phil’s views do not reflect the views of 2strokebuzz, but they come pretty close usually. Photos courtesy of POC Michelle. — illnoise.

What we thought was going to be an entire hall dedicated to the new Chinese bikes on the market turned out to be a hotel meeting room full of Chinese manufacturers all looking for U.S. Distributors. There were still hundreds of booths in the regular show selling misc. Chinese bikes. It looked like the show organizers put all these guys together in one room because they didn’t have distributors in the U.S. and they were obviously not big spenders (most only had 10×10 booths). There were many different manufacturers / sellers with very little brand identity hawking bikes that were obviously identical to the ones in the next booth, the only change being a few stickers etc. We came to notice a trend among these booths, one associate in a suit and tie who only spoke Engrish learned from a script and a pretty girl who stayed seated or stood behind the bikes handing pamphlets to the suit. Communication was a definite problem. Stray from the script and your reward was a blank look and a pamphlet stuffed in your hand. There were a few bikes I saw that were interesting, but trying to get information about them proved impossible. Either we knew more about their product than they did, or they weren’t able to articulate and pass their info on to us. Either way, it was a failure. 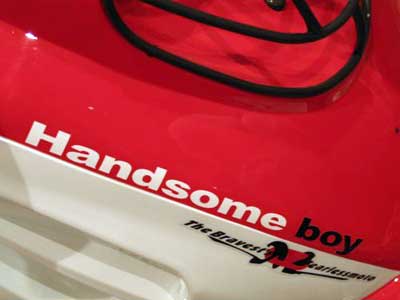 We all love to hear about how bad the Chinese stuff is because on some level we feel threatened and it comforts us to see them just not getting it right. The good news is they didn’t let us down. In the Chinese pavilion I found a Quad/Go-Cart type vehicle that was powered by a Chang Jiang 750cc Motor which is a well known clone of the pre-war BMW motor. This thing was a monstrosity, it had an individual gas tank for each of its 30mm carbs. The power leaves the motor in a drive shaft in typical BMW fashion, but rather than using that shaft and going into a standard differential they decided to install not one, but two jack shafts and run the heaviest chain I’ve ever seen between them. Way to take what should be a simple day at Junkyard Wars and make it unnecessarily complicated. Later in the show I saw at least 4 other companies pimping this same vehicle. We saw obvious disasters like logo stickers mounted to fork stanchions…that’s right the part of the fork that is supposed to be perfectly smooth and the fork seal travels over! We saw numerous scooters with 4 cycle motors that were fitted with 2 Cycle expansion chamber exhausts. One of the most entertaining Chinese booths of the show was put on by Moto-Fino, one Italian guy playing a Casio keyboard (concert at 6pm, no kidding) while the other American kid talked to people about their bikes…or tried to, he knew NOTHING about the bikes he was standing in front of. It became painfully obvious that despite the high booth cost and logistics issues of having a booth at the Dealer Expo most of these people couldn’t even be bothered to learn the names and basic facts about the bikes they were supposed to be representing.

What China is offering

They are all selling their own version of what appears to be 6 different bikes. It’s as though some government decree came down that said “you can put whatever components you want underneath, but from the outside it has to look like one of these”. Be careful though, even well known names like Schwinn are popping up on really lousy Chinese products, so they’re not beyond using an American company to shill for their stuff. Other attempts at name games like Yamasaki (yep, we didn’t make that up) and 18 different version of the “Honda Wings” logo may be a little less effective, but it still represents an underlying sneakiness that can’t be ignored.

The Chinese level of visual uniformity makes it impossible to differentiate one bike from another. You’d think this would make it easy to order parts for the bikes once you figured out what each company called their version…well, we tried. It turns out the Handsome Boy, Z-Bike, Eagle 150, Panthera and Jouster all claim to use the exact same “Gy6 motor”. They all claim that their motor is either “Honda Design or Yamaha Design”. But, how can it be all three when it’s supposed to be the same? They’re all claiming to use the “common and easy to find parts for Gy6”, I’ve seen at least 5 different motors that claimed to be Gy6 that did not share any level of parts interchangeability. Simply put, they are lying. After talking to several Chinese parts suppliers they all admitted that the best they could do was get “pretty close” on a part. They couldn’t keep up with all the different manufacturers shipping bikes in from China these days. They did all assure me, if a part they sold me didn’t fit, they’d be more than happy to send me another, and another, and another. Basically, telling me regardless of what I paid for the part, their mark up was so obscene they could afford to ship me 4 more at no loss to them. Oh, and for the record, the GY6 motor that everyone is talking about was taken from Honda (without permission). It was available in the mid 80’s in the elite / spacey line of scooters and came in 50, 125, and 150cc sizes. Simply saying “It has a Gy6 motor” is NOT enough information when ordering or selling parts. 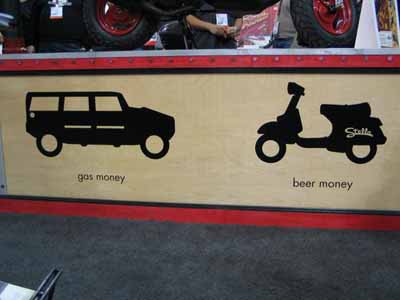 You knew there had to be something to give us hope.

Kymco is attacking the U.S. market with what can only be described as an armada of new scooters. There are at least 6 entirely new models. They appear to be phasing out the venerable 50, 150 and 250cc People line and replacing it with the more angular and stealthy looking 50/4 stroke, 125cc, 200cc and 250cc People “S”. These are good looking bikes, but it’s a shame to see the end of the more traditional, vintage looking scooters. The U.S. is the only market that thinks vintage style scooters look cool, since we represent only a fraction of a percent of the world scooter market, don’t look for any manufacturers to cater their designs to the desires of the U.S. consumer. They are showing off their new 250 and 500cc XCiting scooters, both share the same platform and represent a nice step up from the already impressive albeit cramped Grand Vista. The XCiting scooters do represent a major shift for Kymco into the Big n’ Long world of scooters. Obviously Kymco was trying to keep their wheelbases on the short side which made their scooters the most nimble in traffic, these new bikes are definitely targeting the freeway commuter / traveler. This will be a major year in the U.S. for Kymco it’s obvious they are setting themselves up to be the largest distributor with the best selection in the U.S. 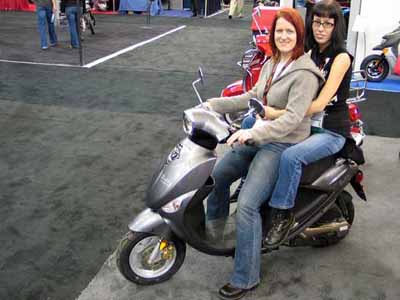 Genuine unveiled two entirely new scooters that represent their embracing of the automatic scooter world. The first was the Black Cat (yes, the firework company) 49cc scooter. This is a small body style scooter that is just begging to be tweaked, tuned and ridden in hooligan fashion. Seeing that it’s an established design with an already huge aftermarket in tuning and accessories this bike should be a huge hit. Their second bike is the Buddy 50cc and 125cc scooter. This scooter is the answer to the folks who found the Stella and most other scooters were too tall, or wanted an automatic transmission. It’s got a very low seat height and a small chassis which claims to top out at over 60 mph.

Vento claims to be making a solid effort at embracing the US market. They claim their bikes are “Different and Better” than all of the other bikes coming in from China. They still aren’t fooling anyone with the whole “Made in America” line, yet, that’s the first thing that comes out of their mouth when you’re talking to a rep. They seem to be offering a large selection of bikes and scooters that are at least different from the “Standard 6” models available by the rest of the Chinese manufacturers. Their quality appeared to be better than we’ve seen from them in the past. It looks like if there’s one Chinese company that may be able to claim a segment of the US scooter market (the bottom segment) it will be Vento. One solid tip would be to stop trying to impress us with 250cc cruiser motorcycles and focus more on the quality of the scooters. The U.S. demand for 250cc motorcycles isn’t that big, and the bikes are just caricatures of the huge displacement bikes they are imitating.

I think we’ll continue to see a rise in the number of shady dealers selling shady product. Despite the 2 Stroke law going in to effect there were no shortage of Chinese importers willing to ship me a container of fifty 49cc 2 Stroke bikes with 2 crates of “misc. parts” to go with it, My cost $299 per scooter. They don’t care about our laws, our safety, or what happens to the scooters once they leave China. It’s become impossible to identify 90% of the available scooters out there by name. Most people were calling them “Vino-type Thing” or “Milano-Type Thing” by the end of the show. Sure, it’s a Chinese invasion, but it will sort itself out. Caveat Emptor has never been more important. If you’re willing to shop around, you can find a good scooter, Go Chinese at your own peril. Despite that fact that Piaggio, Honda, Kymco and all the other names we trust have most of their parts being made in China these days, they’ve set up strict quality control oversights that the other guys obviously aren’t bothering with.

It should be noted that two of the major sponsors for the ENTIRE DAMN SHOW were Cobra Powersports (the folks that bring you the TGB scooters) and TnG Scooters (CMSI). You couldn’t walk 10 feet without seeing their name on something, hell, they even sponsored the Food Vendors and the Live Band. Despite their both being what I would call premier sponsors who are obviou$ly trying hard to attract dealers to their brands, they were completely different in their approaches. Cobra / TGB had 2 Very large displays in what I would call excellent locations. They were well staffed and each had an excellent representation of what their company offered. In contrast I found it very difficult to even find TnG Scooters. Their booth was the minimum possible 10×10 sized unit and they had only 3 scooters present, the Baja 150, The Verona 150 and one of their employees used Venice LX. It was almost as though TnG was saying “We’re going to put our name everywhere, we want you to see our name, but not us”. It was a real let down.