Alright, it’s not Wednesday. But tomorrow is, and it’s the Inauguration of our 46th president, and of all the bands in the world Joe Biden could have requested to close out the event, he asked Gregg Alexander to reform New Radicals and play their 1998 hit “You Only Get What You Give.”

Your first thought, like mine, was probably “why?” They’re a one-hit-wonder, they only released one album and disbanded just before their second single was released. New Radicals was hardly even a “band,” for that matter, it seems to be basically Alexander plus whoever else was around at the moment (often Danielle Brisebois). Then—like me—you remembered how damn good that song was. Any band or songwriter should be thrilled to have one such success. But still… why them, why now, 22 years later?

Turns out the song was a favorite of Beau Biden, and became the Biden family’s rally song through Beau’s cancer treatment and 2015 death. Coincidentally (or not?) Doug Emhoff, Kamala Harris’ husband and our first Second-Gentleman-elect, used the song as his walk-on music during the campaign.

So it all starts to make sense, and honestly I’m pretty excited about it, largely because the video is a masterpiece and has always been a favorite. As you may have ascertained by now, it features some scooters.

The video features Alexander leading a smiling group of diverse, hip young adults as they overthrow the Staten Island Mall. While the tone of the video is as light-hearted as can be, I’m sure politically-minded people can easily picture Jared Kushner and Ivanka as the yuppies put in dog kennels, and Kayleigh McEnany as the Karen who’s pinned down and forced into barista duty. Trapping a mall cop in a net is the first step in defunding the police, right? I like this world these guys live in. Soft-serve from the tap for everyone!

But—of course—the best part is the scooters zipping around. I remembered hearing at the time that Gene Merideth was somehow involved. Gene was the longtime owner of Scooters Originali (located at the time of the video in New Jersey, but later in Pennsylvania, and now under different ownership in the Pacific Northwest). Gene sold me my second scooter back in 1996 or so. He’s in England now, so I texted him to see what he remembered:

“Richard Agerbeek was the one with the hook up, and he brought John Melville along and got me to bring John Wilson so that we had a few scooters for the shoot,” Gene remembers. “Wilson’s was green, John Melville had the blue and white Li3, and Richard had the gold Vespa.”

Sadly, Gene didn’t get much time in the video, as it took the crew a long time to rig a camera to his purple and white Lambretta’s crashbars. On the plus side, the low angle shots from his Lambretta-cam as it dollies through the panicked crowd look amazing, and prominently feature Gene’s feet.

Wilson, Melville, and Agerbeek get more screen time riding through the mall and menacingly circling the bourgeoisie. Agerbeek gets several closeups, and (to reinforce the point that the New Radicals’ lineup was fluid-at-best) he can be seen playing a green bass behind Alexander in the performance shots. Hopefully they bring him back for the inauguration!

Even without the scooters, the video is a wonderful, happy time capsule. I’m sure glad this song is out there. It all feels surprisingly relevant. We need the positivity. Bucket hats are really big right now. “Health insurance, rip off lying/FDA, big bankers buying,” holds up even if the celebrity disses are a little dated. Hey, Beck, Courtney Love, Hanson, and Marilyn Manson weren’t invited to the Inaguration, so Alexander won that battle.

Joe Biden isn’t as new or radical as I would have preferred, but he and Kamala Harris are a hell of an improvement, here’s hoping the next four years are as progressive, fun, and scooter-filled as this video.

For Vespa Video Vednesday, here’s a song NOT about Vespas, and without an actual video, but hey, it’s still Wednesday!

It’s the feel-good single of the summer, a month too late, but whatever, the LP just came out this week… “My Lambretta” by North Cackalacka’s The Gallows Birds is just what you’d hope for, a surf-ish pop-punk love paean to the World’s Finest Scooter.

I’m not the foremost scholar on Lambretta history, but I’m pretty sure the “TV Special” is not a model that ever shipped out of Milan, but it does have “a two-stroke engine and the body’s painted baby blue” so I’ll give them the benefit of the doubt that they’re taking some poetic license. The B-side (of the digital single — I wish it there was a 7″ for my jukebox) is a fantastic cover of the Graham Parker favorite “Local Girls.”

The rest of the debut album (which is thankfully available on LP from Rum Bar Records) is a quick romp through familiar pop-punk territory, but there ain’t a thing wrong with that. If you liked the Smugglers, you’re gonna dig this. Along with a few other 100%-solid originals, there are top-notch takes on Wreckless Eric and the Beach Boys. And the front AND back covers feature a Lambretta, and it includes a mini-poster, so… I see you’ve already bought it, nevermind… (Thanks, Matt, for suggesting I preorder this two months ago, ha!) 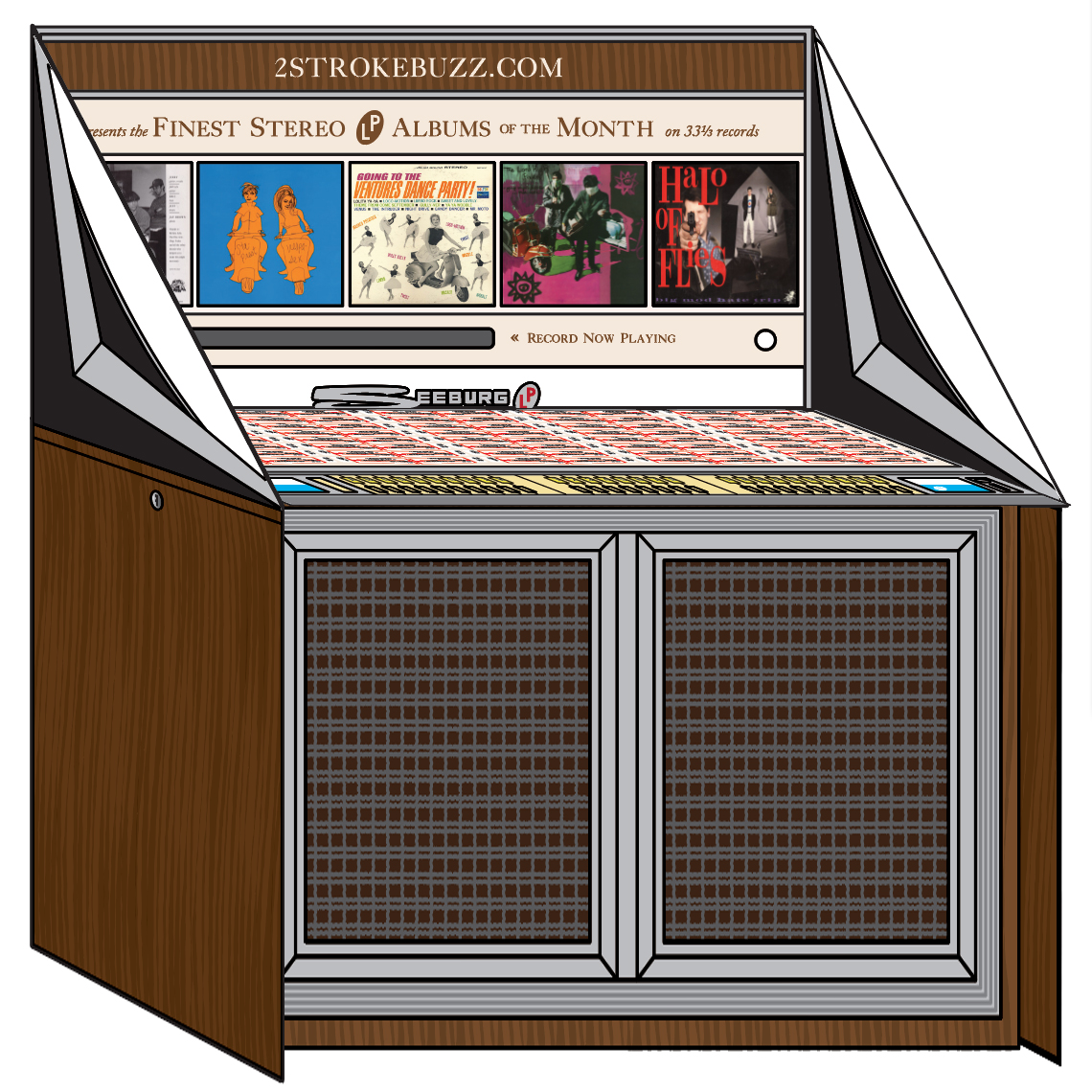 I need a “winter project” to keep me sane through the long Chicago winters. Last year, it was my first Lambretta after 25 years of Vespas. This year, in January, I resolved to finally get our 1962 Seeburg LPC-1 jukebox running again. A month or so ago, with a lot of help and a level of obsession approaching my scooter projects, it came back to life, and we’ve really been enjoying blasting our scratchy old 7″s through the house at the press of two buttons.

On the last day of school before the COVID-19 quarantine here in Chicago, my son Calvin brought home an origami piano that his friend Kingston taught him to make, and I thought “That shape looks familiar!” During our first weekend of quarantine, I made a prototype, then a fancy papercraft model of our jukebox based on Kingston’s piano, and here’s a PDF file so you can print it and assemble it yourself! Hopefully this project entertains you for a brief period while you’re housebound. If you’d like some background music while you assemble it, check out our Jukebox Playlist on Spotify:

Someday we really hope you can come by and see the real thing in person, it’s a beauty. If you enjoyed building this, maybe you’ll want to check out the 2strokebuzz Action Toy we made way back in 2001!

END_OF_DOCUMENT_TOKEN_TO_BE_REPLACED Back in “the day,” we used to post music videos featuring scooters on ”Vespa Video Vednesdays,” and just the other day Matty sent me one so good that I decided to revive it next time a Wednesday rolled around. But that one is in the hopper. In the meantime, i want to share a story that came to mind today, even though it’s Monday:
END_OF_DOCUMENT_TOKEN_TO_BE_REPLACED The Lambretta Club USA is famously (and justifiably) snobbish about their national rally, only Lambrettas and their attendant Lambrettisti are welcome, so I was flattered to be invited (my scooter of choice be damned) to serve as official photographer of this years’ Lambretta Jamboree in Duluth, Minnesota.

It was an amazingly well-organized and fun event, and hopefully any lapses in the quality of my photography were balanced by the quantity, I took an awful lot of photos, and you can see them all here. Thanks to Matt, Peter, Patrick, and all the other Minnesotans and LCUSA brass for all the work you put into an event I’ll never forget. Here’s a fun story and mystery from our pal Karm Parker, a Torontonian who moved to Columbus, OH about a year ago: Karm, like many of us rally-going scooterists, visits a lot of thrift stores and lately he had the idea to steal the film from any cheap cameras he finds. He carries around a few batteries to (hopefully) safely rewind it, and sends it off to Dwane’s Photo to have prints made. In his very first batch, two came back ‘black’ (exposed to light at some point). One roll was too damaged to print. But the last roll had 10 pictures… of scooters!
END_OF_DOCUMENT_TOKEN_TO_BE_REPLACED

Not a damn Vespa to be seen.

But at least it’s not this.

Keepin’ it real for the children of the revolution. It’s been more than a year since our last (non-CWC) post, and i’m sick of dumb April Fools’ pranks, so here’s something real, and awesome: Motorliebe, aka Lars, Dani, Blumi, and Mariuz, rode across the U.S.A. last summer on Vespa P200s, and I know a lot of 2SB readers had the pleasure of meeting them along the way, especially at PVSC Band Camp. They were self-sufficient, organized, and ridiculously fun to be around, and I think we were all a bit bummed out to see them go back to Germany. Meeting them was a highlight of my summer and reminded me why I love scootering, and it certainly made a certain Thomas Müller goal a little easier to swallow.

Be sure to check out their great video!

Anyway, point being (when did 2sb ever get to the point quickly?) Motorliebe’s photo book about their trip is coming out soon, and was previewed in a great photo gallery and interview with Dani in German newsmagazine Der Spiegel. It seems to be available for preorder from the publisher and amazon.de but I’m a lame monoglot and can’t figure out shipping. I’ve asked the guys if it will be available in the U.S., I’ll let you know when I hear back.

Veloce books, the British motorsports publisher responsible for at least half of the decent scooter books available out there, has published a Vespa Buyer’s Guide mobile app. The last thing I need is more vintage scooters so I’m too cheap to drop $2.50 on it, but if it’s anything like their books, it’s probably useful, worth the money, comfortingly Anglocentric, and <snark>not as well-designed as it could be.</snark> Amerivespa 2013 registration is now open! The Vespa Club of America’s national rally returns to San Diego on June 27-30, with all the usual good stuff, plus a Friday night performance by the English Beat!

Even though Bryan has his weekly VVV where he showcases a scooter centric videos each and every week, I had to share this new video from The Lions. The Lions feature members from Hepcat and a few other LA area bands and the video for their new single features some nice Vespa/Lambretta footage. Notice that only the Vespa riders receive credit at the end.

I’m not going to start another flame war with a musician and his fans, so I’ll let you make your own judgement about Chroma’s “The Scooter Song.”

“The Scooter Song” (track 3) is one of the most popular songs by Chroma. At live shows, those familiar with the song do the Scooter dance while shouting “Scooter” during the refrain.

Thanks for the link, Mad Man Maddox! The 2012 2012 Mods vs. Rockers rally was Father’s Day Weekend, we made it out to the Mayday SC Friday night party at Late Bar, but once again we couldn’t make it to the main event on Saturday, so Jordan sent loads of great photos. Thanks, Jordan!
END_OF_DOCUMENT_TOKEN_TO_BE_REPLACED